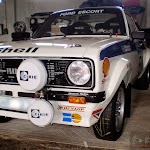 Björn “Walle” Waldegard was sacked from the Alitalia sponsored Lancia team. This was after he have beaten his team mate Munari in San Remo. He then went to Ford and at his first start in Ford Escort RS 1800, in Europe (RAC 1977) he entered with the car WTW 567 S sponsored by British Airways.

He not only beated up Munari but also his team mate Roger Clark who was expected to win. Since that moment Björn Waldegård became a true legend of Rally. Somehow it was also obvious that British Airways was the prefered Airline as well….

He became the first ever driver to get the Rally Championship after a close fight with Hannu Mikkola (this was in 1979).

We have built an exact replica of WTW 567 S.